The Homeschooling Wars And Your Divorce 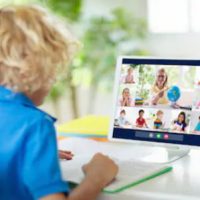 This is a huge mess for the courts right now as more and more Americans take out their ire on the U.S. government and the institutions they control. While some parents refuse to send their children to public schools, they generally choose private or parochial schools as an alternative. However, more parents, especially religious parents, are afraid of exposing their children to cultural vices that are promulgated in American society and clash with the morals of the religious.

The mother contended that the children were subject to bullying and that she could better meet the needs of her dyslexic child than the school could. The trial court found no reason to believe that the mother’s diagnosis of dyslexia was correct without medical specialists issuing an opinion. The mother had no training to work with dyslexic children either. Thus, the court denied the mother’s request and SCOTUS backed their decision. Below, we’ll take a look at the decision.

The best interests of the children

The court is always forced to render a decision based on the best interests of the children. That means two things. Firstly, once the court is involved in the decision, the decision is out of the parent’s hands. It further means that had the father never contested the decision, the children would be homeschooled right now. Second, it means that when a parent goes into court saying that homeschooling is in the best interests of their children, they cannot provide the court with a baseless diagnosis and assert that they are better qualified to handle learning disabilities than someone who has specific training. In other words, the court balked at the mother’s arguments, not necessarily the choice to homeschool. They also balked at the mother bringing up past drug addiction issues with the father finding that there was no evidence to indicate a present danger to the children.

The decision to homeschool a child is often met with suspicion by the courts. The courts may want to determine if there is some reason why the parent wants the child away from the prying eyes of teachers and counselors. Ultimately, the question of whether or not the parent is depriving the child of education will be important for the court to determine. The court will generally assume having access to more teachers and peers will be better for the child’s socialization, even when bullying is a factor.

So when the parents are divided on the issue, the court is more likely to block the effort to homeschool the children on the basis of the child’s best interests.

Philadelphia divorce lawyer Lauren H. Kane helps parents advocate for their children in major custody matters. Call today to schedule an appointment and we can begin discussing your options immediately.

By Lauren H. Kane | Posted on October 6, 2022
« Social Media And Your Divorce
Who Determines If Your Children Are Vaccinated After Divorce? »