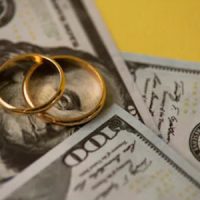 A recent survey conducted by a debt settlement company surveyed around 2,000 Americans asking them questions concerning debt and marriage. These Americans reported that debt was a good reason to either delay marriage or pursue a divorce. These individuals have also stated that inheriting a partner’s debt is a good reason to put off marriage.

Before we discuss why a debt collection company is interested in how your account in arrears can impact the most important aspects of your life, we must advise you that you will not “inherit your partner’s debt” simply by marrying them. You’re only responsible for debt the two of you acquire while you’re together. Hence, at least 50% of the problem doesn’t actually exist.

That begs the question: Why is debt such a major concern?

When you and your partner get married, their debt does not suddenly become your debt. However, their debts do not go away either. These debts remain on their credit score, can make it more difficult to secure a mortgage, and prevent you from taking the next steps in your marital lives. Marriage is an expense. You have the wedding itself, the honeymoon, and you’re probably not going to want to go back to living in your one-bedroom apartment. Folks don’t generally get married and then lead the same lives they led before. It’s a watershed moment in their lives. Things are expected to be different after the marriage. More couples are paying for these weddings themselves and then taking on the expense of securing a house, furnishing the house, and even preparing for a baby. Since the marriage is more about the house, the baby, and the commitment to a family, it becomes less about the ceremony. You can love someone without getting married, but if you’re going to take on the expense of marriage, then it might as well be for the house and the baby and not for any other reason. If the marriage is about the house and the baby, then the best choice is to wait until you’re financially able to meet those commitments. So the marriage waits for financial stability.

Unfortunately, this is resulting in many Millenials and Gen Z’ers delaying or avoiding marriage entirely. The majority of their debt, of course, is student loans that can never be discharged in bankruptcy. Their economic prospects are not allowing them to keep up with these payments. So, if debt remains a major concern for Americans, we may continue to see the marriage rate decline while the divorce rate goes up. Worse still, debt collection companies know about that.

If you are ready to untie the knot, call the Philadelphia divorce lawyers today at the Law Offices of Lauren H. Kane to schedule a free consultation and discuss your future in more detail.

By Lauren H. Kane | Posted on September 8, 2022
« Divorcees Say Their Finances Improved After Divorce
Social Media And Your Divorce »