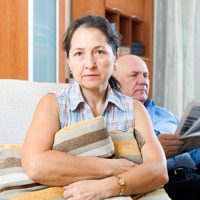 The pandemic caused Americans to suffer unprecedented income losses even as costs related to food and housing soared. An individual collecting an $800/month disability check can expect to be priced out of a one-bedroom apartment in every major city across the United States. This has resulted in an uptick in homelessness among those 50 or over. Factors that predict homelessness among the disabled elderly include divorce.

Economic instability a factor in homelessness

While homeless people are generally considered to be individuals who have mental illness, substance abuse problems, or an innate wanderlust that makes participation in civil society impossible, the reality is changing. Today, 50+ seniors are making up more of the homeless population than ever before.

Why? The pandemic prevented the working poor and elderly from keeping their jobs. Some who were already on disability and didn’t work, saw rent prices sore during the pandemic. On top of that, the costs of everything else went up as gasoline prices increased.

Divorce remained a consideration for the working poor, especially the elderly. Expenses which could be split down the middle no longer could be forcing elderly people into a market that immediately ran through their expenses. Worse still, the numbers are expected to triple over the next decade. More and more individuals who are elderly will be forced out into the streets due to divorce, rising rent costs, and other material factors that prevent them from working.

While baby boomers are blamed a lot for the current economic problems, many of them did not invest in 401(k) plans due to an assurance that social security would cover them later in life. While they are collecting checks, these checks are too small to cover even rent let alone other expenditures a person accumulates simply for being alive.

Some of this is an infrastructure mess. Real estate projects for rich folks are being green lit by the thousands while low-income housing remains incredibly difficult to find. An individual collecting an $800 check would have to live on $400 if they could find an apartment for $400/month. They simply don’t exist.

With fewer individuals making enough money to afford housing, the homeless problem is expected to exponentially increase over the next decade with the older population facing the brunt of the problem. If they can’t work nor earn enough to afford housing, then they are, by definition, homeless.